A Brief Personal History from Someone Who Thinks in Pictures... 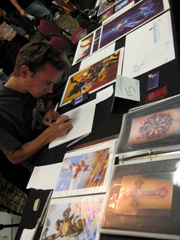 I am told it all began with a toothpick.

Apparently my mother had dropped a box of them on the floor, and I, a mere 4 months old, picked one of them up.  Several weeks later after hearing the story, my Pediatrician predicted I'd be an artist.

My childhood was filled with days that I suppose most artists younger days were filled with: drawing, building model kits, and watching movies that were far too scary for my youthful eyes.  Predator, Forbidden Planet, Clash of the Titans, and the Wolfman all haunted and fascinated me.  The precise moment I knew I wanted to create for a living, however, came when I was about thirteen.  I had finished mowing the lawn and took my newly earned, crisp dollar bill to the corner store to buy some candy when I saw on the shelves stuffed in with all the baseball, football, and basketball cards the image of a man fighting a Pterodactyl.  I was introduced to Frank Frazetta. I bought as many of those cards as I could, and cherish each and every one to this day.

In High School I was fully encouraged to push my talents, even to drop classes to study more art. I learned how to push paint around, etch copper plates, and build jewelry.  I was introduced to Art History, and I finally understood that there were far more diverse artists from which to learn than Jim Lee and Arthur Adams, even Frazetta.  When I entered The School of Visual Arts, I realized I was no longer one of the bigger fish. I became one of five thousand students all clamoring towards the same goal.  I learned color theory, composition, the properties of light, and most of all, just to open my mind to all forms of influence.  I was in New York City, how could I not?

During and since that time, I have worked building master sculpts for model kits, as a concept and storyboard artist for a small movie studio, a technical illustrator for various publications on prehistory, and most recently as a Tattoo Artist and Comic Illustrator.

I am fascinated by dinosaurs, science, history and myth.  I obsess over details when I have the time, and worry about them when I don't.  I realize there are far smarter and gifted people than me out there, and learn everything I can from them.  I refuse to stop if there is something to be gained. I draw inspiration from anything: a rock, a root structure, ancient civilizations, my life, or my animals.  My world is one of wonder, if not outside, then upstairs at least.  I can enter it at any time and step back to the Age of Dinosaurs, into a dragon's lair, fantasy castle, or future battlefield.  With pen and paper, I am never bored.

Please enjoy.  It is my pleasure.
Powered by

Create your own unique website with customizable templates.
UA-34165178-1